To start with heathers are ‘dwarf shrubs’. This means that like all shrubs they are woody and brittle and so can be easily snapped. But unlike other shrubs they are low growing and thus very liable to be stepped on, when, unsurprisingly, they do not bend, but snap off. This is why heathers readily die when walked over, and new bare paths are so readily formed where they were not present before.

When we go out on our seemingly tough old heathlands we should  remember that appearances can be deceptive and that actually, like other old things, they are rather on the fragile side. So keeping to existing main paths, even when a tad muddy,  stops the heath becoming criss-crossed by many new ones (and makes it less likely that we will disturb those rare ground nesting birds in summer). And always picking  up and removing dog poo helps to prevent those main paths becoming lined by widening bands of non heathland (and avoids the health hazard which is just as relevant here as in formal open spaces). If we want our heaths to continue to provide for our needs, we do need to be aware of theirs.

Dogs and birds around our winter coast 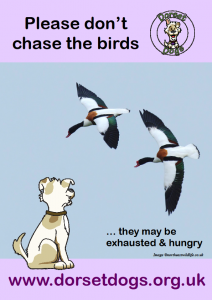 As harsher weather comes in we can help coastal birds to survive and thrive:

Some birds are more flighty than others,  so try to keep yourself and your dog at a reasonable distance away so that the flock does not have to take flight. Other things like bait digging, kayaking, fishing and all sorts of other activities can make them take flight too, so it’s all about giving them the space they need.

Find out more & test your coastal bird recognition at https://www.dorsetdogs.org.uk/wagipawdia/dogs-birds-around-our-winter-coasts/

The Dorset Dogs Festival at Canford Park SANG is u

Some photos from our Canford Park SANG Preview Wal

We had a great morning at the Big Weymouth Walkies

Lots of lovely dogs at the Big Weymouth Walkies

We're on Weymouth Beach today for the Weymouth Wal

Paws at Moors could be just the thing for Mother's

Scroll back to top